Alsop students “Stand Together” to remember the victims of genocide during the Holocaust Memorial Day Civic Service at Liverpool Town Hall. 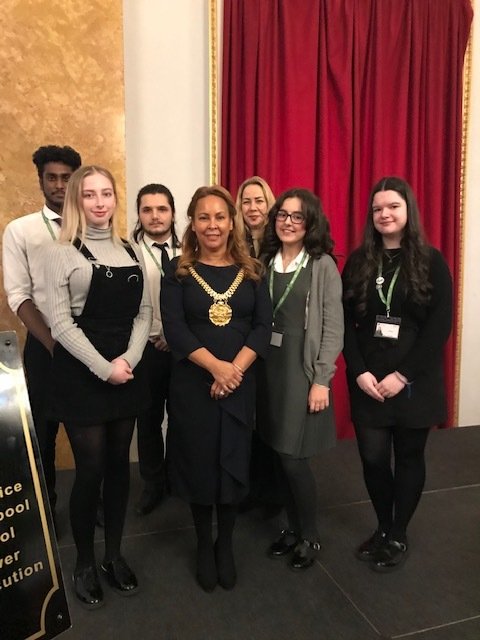 On 27th January, students from Alsop High School, Archbishop Beck Catholic College and partner primary schools attended Liverpool Town Hall, for the Civic Service for Holocaust Memorial Day. During the presentation, they highlighted how genocidal regimes have marginalised certain groups. They reminded those assembled how people had successfully challenged oppression.

The theme of Holocaust Memorial Day 2020 is “Stand Together.” This year marks the 75th anniversary of the liberation of Auschwitz-Birkenhau. We will also remember the liberation of Bergen-Belsen concentration camp during April.

The Lord Mayor of Liverpool, Councillor Anna Rothery spoke about why we all needed to “Stand Together” and challenge racism and hatred. With Rabbi Avinoam Czitron from Childwall Hebrew Congregation she lit a candle to remember those who perished during the Holocaust.

The service also included an Act of Commitment from the leaders of Merseyside Christian Churches. Church leaders made a solemn pledge to eradicate all forms of racism and hatred from society.

Mr Bull comments: “It was a great privilege for Alsop students to be asked to participate in this powerful service of readings, music, prayers and speeches. As we remember the 75th Anniversary of the liberation of Auschwitz it is so important to stand together and challenge hatred in all its forms.

We must never forget those who perished during the Holocaust and work together to build a society based upon respect and fairness.”