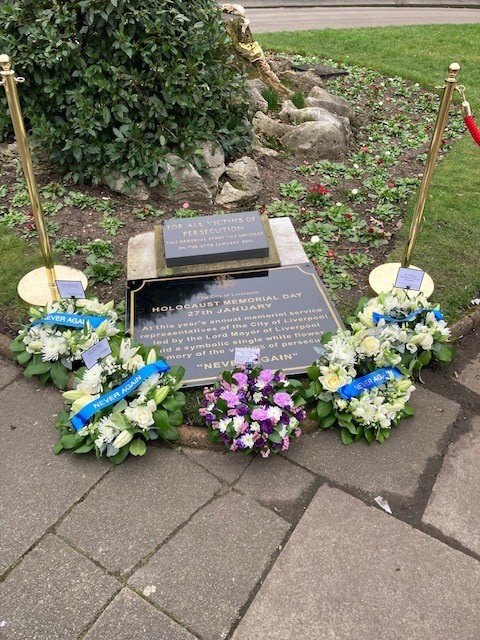 Students from Alsop High School have laid a wreath to remember the victims of the Holocaust and more recent genocides in Cambodia, Bosnia, Rwanda and Dafur.

Sixth form students Kiera Riley and Jessy Taylor laid a wreath on behalf of Alsop and the young people of Liverpool at the Holocaust Memorial Stone in St Johns Gardens on Monday 24th January 2022.

They joined the Lord Mayor of Liverpool Councillor Mary Rasmussen, the Deputy Mayor Councillor Jane Corbett and Councillor Richard Kemp to reflect and remember those people who perished during genocide.

Rabbi Natan Fagleman, from Allerton Shul recited the 23rd Psalm and invited those present to keep a minutes’ silence in honour of those who died.

Both Kiera and Jessy feature in a short film to be shown at Liverpool City Council Civic Service to commemorate Holocaust Memorial Day. They speak about a number of significant days in history where the lives of people changed as a result of persecution and genocide.

Jessy Taylor comments:
“It has been an honour and privilege to represent the young people of Liverpool and lay a wreath in memory of those who died and suffered during the Holocaust. We are pleased out film reminds students to consider the ways individuals and communities to remember and to reflect on the depth humanity can sink to.”

Keira Riley reflects:
“We are proud to participate in the HMD film. We hope that young people will never forget the atrocities suffered by so many people. We hope the film will keep the memory of the Holocaust alive for many generations to come. We hope it will encourage young people to learn more about the past, to empathise with others, and create a better future.”

The Holocaust Memorial Day film is now available for use in Alsop and other schools.

The film is dedicated in memory of the late Mrs Marilyn Fielding, who served as Chair of Governors for over 30 years. As a former Liverpool Councillor Marilyn helped establish the first HMD Commemoration, which has since become an annual event.